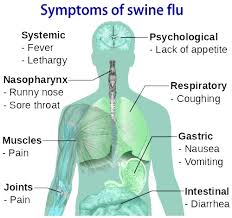 Swine flu also known as Swine Influenza or Pandemic Influenza is a respiratory disease. It is caused by a virus called H1N1 virus. This virus infects the windpipe (respiratory tract) of pigs and later it gets transmitted to human beings. It results in nasal secretions, cough, decreased appetite, and restless behaviour.

Swine flu has an incubation period (the time taken for the symptoms to appear) of 1-4 days. Its symptoms are similar to influenza (flu). This include:

Swine flu is caused by a virus called H1N1 virus. This virus infects the windpipe (respiratory tract) of pigs and later it gets transmitted to human beings. It results in nasal secretions, cough, decreased appetite, and restless behaviour.

Swine flu can spread to others up to about 6 feet away. The flu viruses are spread mainly by droplets when people with a flu cough, sneeze or talk. These droplets can land in the mouth or nose of people who are nearby, which can be possibly inhaled into the lungs. In some cases, a person might also get flu by touching a surface or object that has flu virus on it.

Swine flu can be diagnosed clinically by the patient’s history and their symptoms. The diagnosis may further confirm in the laboratory through a technique called RT-PCR (Reverse Transcription Polymerase Chain Reaction).

Two antiviral agents are helpful in preventing or reducing the effects of swine flu. They are zanamivir (Relenza) and oseltamivir (Tamiflu). Both are also used to prevent or reduce influenza A and B symptoms.

These drugs should not be used indiscriminately i.e. without the doctor’s prescription. Because it can lead to ineffectiveness of the drug due to viral resistance.

The most efficient way to prevent the spread of infections is to practice good hygiene. Vaccination against influenza also has some role.

2. “Hands-off-the-face” approach. Resist all temptations to touch any part of the face.

4. Clean your nostrils at least once every day with warm saltwater. Blowing the nose hard once a day and swabbing both nostrils with cotton buds dipped in warm salt water is very effective in bringing down viral population.

5. Boost your natural immunity with foods that are rich in Vitamin C (Amla and other citrus fruits).

6. Drink as much of warm liquids (tea, coffee, etc., ) as you can. Drinking warm liquids has the same effect as gargling but in the reverse direction. They wash off proliferating viruses from the throat into the stomach where they cannot survive, proliferate or do any harm.