Home » Health » What Happens to the Brain When You Eat Too Much Salt? 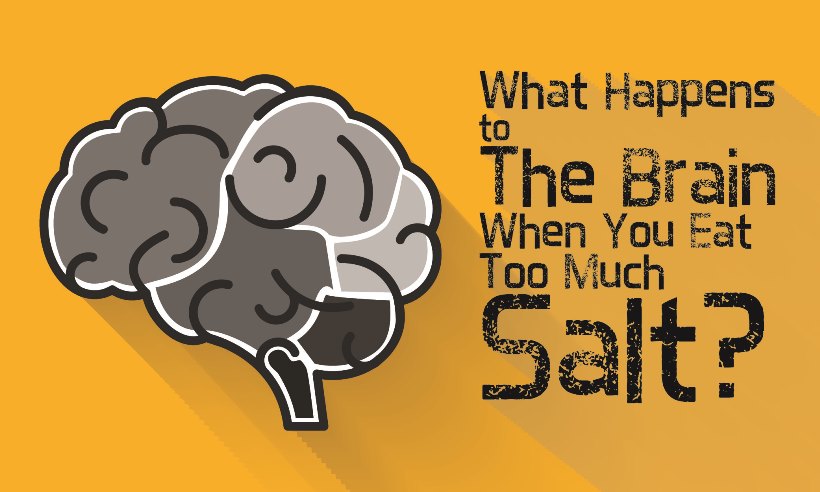 What Happens to the Brain When You Eat Too Much Salt?

We all know that eating too much salt leads to high blood pressure problem. But did you know eating a lot of salty foods can also cause damage to your brain? Shocked, right? Studies claim that a high dietary sodium intake may impair cognitive function in people. We cannot deny that sodium is indeed essential to human health, because it helps to maintain the electrolyte balance, maintains muscle contractions and nerve transmissions, prevents diabetes, improves cardiovascular health, and combats sunstroke. However, an excess of anything can be bad, and so is the case with salt. Let us explore what happens to our brain when you eat too much salt.

What Actually Happens to the Brain When You Eat Too Much Salt?

A study was conducted in Canada in the year 2011 wherein 1200 older sedentary adults participated. At the end of the study, it was found out that there is a connection between high-sodium diets and increased risk of cognitive decline. The study claimed that a high diet in sodium alone might affect cognitive function in sedentary older adults.

According to a new study published in the journal Nature Neuroscience, eating too much salt can cause brain-related problems such as stroke, cerebrovascular disease, and cognitive impairment.

Researchers say that one possible mechanism behind these negative effects of overeating salt involves endothelial cells which are present inside the cerebral blood vessels.

Endothelial cells are responsible for regulating the vascular tome, but high dietary intake of sodium can cause these cells to dysfunction. Epithelial dysfunction can cause a lot of diseases.

A study was done recently to show a link between high-sodium diet and memory problems in mice. In this research, researchers fed a group of mice the equivalent of a human diet high in salt for 12 weeks.

Within 12 weeks, the mice showed a reduction in the blood flow to the brain and memory and thinking problems. They had trouble telling new and familiar objects apart. They could not build a nest, and it became hard for them to get through mazes. However, there was no change in the levels of their blood pressure.

When mice ate the food given by researchers, the excess salt triggered a response in their small intestine. It produced large amounts of TH17, a type of white blood cell which is involved with the immune system. This further led to a rise in levels of IL-17, another component of the immune system.

When our body produces too much IL-17, it is unable to supply enough of nitric oxide, which is made by cells that line blood vessels. When the levels of nitric oxide levels drop, blood vessels cannot relax, which disrupts the blood flow to the brain.

Nitric oxide is required for the brain to work properly. The researchers wanted to see whether their findings would be the same in human cells or not. Hence they treated human endothelial cells with IL-17 and shockingly, they obtained similar results.

Fortunately, all of these negative effects of the high sodium intake can be reversed. The findings suggest that lifestyle changes may help to offset the negative effects of a high-salt diet. So there are many negative things that can happen to your brain when you eat too much salt, hence you should limit the consumption of salt to keep yourself healthy.
Eat a balanced diet, and exercise to keep your brain healthy.