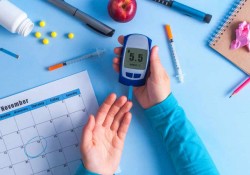 NEW DELHI: Diabetes has emerged as a major disease burden for India over the past two decades. While diabetes rate has increased by around 45% globally, it has jumped 123% in India between 1990 and 2013; the latest study has shown.

Data shows diabetes is now among the top ten reasons for various other disorders among both men and women as it breeds obesity, obstructive sleep apnoea, severe kidney and lower urinary tract infection, stroke and many other diseases.

The findings are part of a global study conducted by the Institute for Health Metrics and Evaluation at the University of Washington.

The study, based on the analysis of 301 acute and chronic diseases and injuries in 188 countries, said the trend which has been more common in rich countries for several decades is now picking up in developing nations such as India, China and Mexico.

The maximum jump was observed in Type 2 diabetes, which is usually related to obesity and is the most common form of the disease.

Experts say the trend is linked to the economic development of India over last two decades which has massively impacted the lifestyle including the eating and sleeping habits among youngsters.

Myths and Facts about Diabetes

“Diabetes is an escalating problem in India and has major socio-economic dimensions. Rapid dietary changes coupled with a decreased level of physical activity have resulted in increasing obesity and diabetes in rural and semi-urban areas,” said Dr Anoop Misra, a leading endocrinologist and chairman of Fortis-CDOC for diabetes and allied sciences.

According to Misra, increased stress level, irregular working hours, lack of exercise and consumption of alcohol and fast food are some of the significant contributors to the increasing incidence of diabetes in India.

Doctors say diabetes is one of the leading causes of increasing disease burden among both men and women at an early age. For instance, more youngsters now face heart diseases, blood abnormalities, nerve damage, arthritis and other such disorders.

The study, however, shows a slight decline in deaths from communicable diseases like malaria and tuberculosis, while chronic diseases like cancer and diabetes are on the rise.

However, the burden of disability measured with the population living with any given disorder in a year has not changed much over last two decades along with the causes remaining largely same on the list of top ten.

The top-ranking diseases in India in both 1990 and 2013 include depressive disorder, iron deficiency anaemia, low back pain, migraine.

Diabetes, which did not feature among top ten diseases in India in the 1990s, ranked eighth in 2013.