Home » Trending » Even Your Wi-Fi can cause Cancer 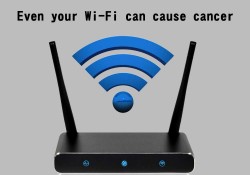 Even Your Wi-Fi can cause Cancer

Citing some scientific publications, they have written to the United Nations Environmental Programme (UNEP) that exposure to electromagnetic field (EMF) effects living organisms at levels well below most international and national guidelines.

“Adverse effects include increased cancer risk, cellular stress, an increase in harmful free radicals, genetic damages. Damage goes well beyond the human race as there is growing evidence of harmful effects to both plant and animal life,” they said in a joint appeal. It also calls for the development of more protective EMF guidelines, encouraging precautionary measures and educating the public about health risks, a particular risk to children and foetal development.

Prof Girish Kumar, one of the signatories, told TOI the International Agency for Research on Cancer had classified EMF as a possible carcinogen (group 2B) but, despite that, WHO continues to maintain there is insufficient evidence to justify lowering these quantitative exposure limits.

“Since there is controversy about a rationale for setting standards to avoid adverse health effects, we have recommended that the UNEP convene and fund an independent multidisciplinary committee to explore the pros and cons of alternatives to current practices that could lower human exposures to radiofrequency and electromagnetic fields,” Kumar, who teaches at IIT-Mumbai, added.

Before this, BioInitiative 2012, a collaborative effort by 29 authors from 10 countries including the chair of the Russian national committee on non-ionizing radiation had raised the same issue. It had claimed “bio-effects” of non-ionizing radiation occur in the first few minutes of use at levels associated with the cell and cordless phone use. Scientists suggested limited use of the mobile phone.

“There is no direct evidence of health effect due to exposure to radiation emitted from cell phones and cellular towers. In India, a large-scale study has been commissioned to confirm the cause and effect relation between radiation and its health effects. Till then, precaution is advisable,” said an AIIMS doctor.

AIIMS and 16 other top scientific institutions in the country have been commissioned by the Union government to address concerns about radiation emitted from mobile phones and phone towers. Sources said the department of science and technology had already allocated funds ranging from Rs 22 lakh to Rs 2 crore for research.

“The maximum period to complete the projects awarded to the 17 institutions is 36 months while the minimum time is 18 months,” a senior official said. He said local-level research is needed as those conducted abroad may not determine the effect on Indians due to varying climates.