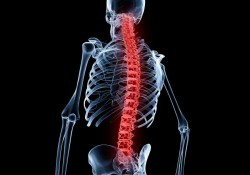 The spine is an anatomical design marvel. It is a string of 33 vertebrae, or bony blocks held together by ligaments and tendons and supported by large muscles. The spine encases and protects the spinal cord and the nerve roots to safely relay messages to and from the brain to various parts of the body. The spine’s design allows for flexibility, strength and mobility across planes, and lets us go through our everyday lives without giving much thought to it. Till our spinal health takes a blow.

The spine most often makes its presence felt when the large nerve roots that go to the legs and arms get irritated (this condition is called sciatica). Or when the smaller nerves that innervate or connect to, the spine gets irritated. Or when the back muscles get strained, or the bones, ligaments or joints are injured. Finally, the discs, or the gel-filled cushions between the 33 bony blocks, can slip out of alignment, pressing against the nerve, causing pain—this is called a slipped or herniated disc.

Spinal health problems are on the rise in India’s metropolises. Rajeev K. Sharma, senior consultant (orthopaedics) and joint replacement surgeon at the Apollo Hospital in Delhi, says over the phone: “Over the last decade, the number of people coming in with spinal health problems has gone up three-fourfold. What is particularly disheartening is to see young people in their 20s and 30s with spinal injuries. I first blame work-related stress and the complete lack of exercise. The condition of the roads in cities makes spinal injury inevitable.”

Stress and lack of exercise make the spine vulnerable. And travelling on poor, potholed roads leads to injury. Satish Chandra, chief scientist and head of the National Aeronautical Laboratory’s structural technologies division in Bengaluru, conducted a study last year that showed as much. He runs a lab filled with aerospace engineers who work on aircraft crash safety. His scientists do crash-and-impact tests on aircraft using computer simulation and other equipment. “We realised that we had all this equipment we could use for other purposes. And a basic question that interested us was how damaging to our spines are the roads in Bengaluru?” he says over the phone.

For the study, a seat pad accelerometer and a 65kg dummy were placed over a sensor that measured the forces acting on the back. An autorickshaw and a car were driven at 25km per hour, which is the speed at which a motorist would drive after spotting a speed breaker or a pothole. Chandra says the study results, which are yet to be published, showed that it took 40-speed breakers or 200 potholes in a car for the spine to be stressed, or become vulnerable. In an autorickshaw, six-speed breakers or potholes were sufficient to cause the same amount of distress. “If you are driving over 20 potholes a day in a car, after a while you are likely to have a spinal injury. What can help prevent some spinal injuries is wearing a seat belt. We have designed a seat belt that can be retrofitted on an autorickshaw,” says Chandra.

You can also take steps to strengthen your back. One, regular exercise is important. “Just start walking every day, if nothing else. You can follow that up with back-strengthening exercises in the gym or yogic poses,” says Dr Sharma.

Two, stress management is keys—a lot of the physical pain people experience is precipitated by stress. Yogic breathing exercises can calm the mind. “The traditional Surya Namaskar is a no-no for people with back problems. (But) there are several yoga poses that are extremely beneficial for the spine,” says Namrata Sudhindra, a yoga instructor in Bengaluru. “It is best to learn the right ones from a trained yoga teacher,” she adds. Meditation too is useful as it has been scientifically proven to reduce blood pressure and heart rate and make the brain waves more coherent—all indications that stress is being kept in check.

Three, a study by Anoop Mattam and George Sunny from Bengaluru’s St John’s Medical College, published in the Asian Spine Journal in February, found a correlation between vitamin D deficiency and lower back pain. Research has found that 60-80% of Indian adults are vitamin D deficient.

While correlation doesn’t imply causation, other studies have reported a similar correlation too. So if you have lower back pain, it may be worthwhile to get your vitamin D levels checked.

Sujata Kelkar Shetty, PhD, is a wellness expert and a certified life coach. She has formerly worked as a clinical scientist at the National Institutes of Health in Bethesda, US