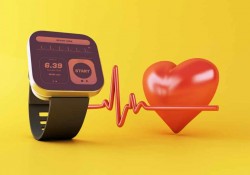 Wear Fitness On Your Sleeve

In a market hot for fitness apps and wearable devices, the ones developed by Indians for Indians are giving imported devices a run for their money.Finding fitness is like finding religion.
There you are, adrift in a sea of immoral carbohydrates and fats, knowing that you need savings but are not able to do anything about it. Half-hearted attempts at recovering your soul from its inertia, resolutions to be a better person that go up in smoke at first sight of a bowl of ice-cream nothing can offer you the hope of permanent redemption. And then, suddenly, you find fitness or fitness finds you. Things fall into place; your life has a purpose, and you look back with a shudder at your ungodly days when you would sleep till 9 am instead of going for a run.

For Vishal Gondal, the founder of fitness technology company GoQii, which is based out of California and Mumbai, the moment came a few months after he had sold his successful start-up Indiagames to DisneyUTV Digital. “I used to be a national volleyball player in school. But the startup life, with its irregular hours, stress and junk food got to me, and I became completely unfit. After I had sold Indiagames, I realised I had to do something about it, and got into fitness devices,“ says Gondal. He tried several wearable fitness and activity trackers from global brands like FitBit and Jawbone, but he realised that they only started working for him when he used the data collected by the devices to get personalised diet and exercise advice from a friend, who was a running coach in California. “I was travelling a lot at that time, and I would send him all the data and inputs, and he would give me feedback,“ says Gondal. It worked, and today he has run ten half-marathons and four ultra-marathons.

His personal journey inspired Gondal to start GoQii, and he took the lesson from his experience -that data means nothing without somebody trained to interpret it -pretty seriously. GoQii is subscription-based and once subscribed to; you get a band and a personal coach. Users can also download the app on their smartphones and sync it with the band, which monitors physical activity as well as sleep patterns. This is recorded by the band while a coach at the back-end keeps tabs and suggests diets, exercise routines and changes in sleep patterns.The brand aims to have 1,000 experts on its platform by the end of the year. POISED FOR A FIT INDIA MOVEMENT GoQii is just one of the Indian brands at the convergence of fitness and technology an area global experts say is one of the biggest consumer technology sectors today . Apps and wearable devices are being used by millions of people around the world to monitor everything from the number of calories consumed versus those burnt, heart rate, blood pressure and even menstrual cycles and ovulation days.India, where the fitness fever is just India, where the fitness fever is just about catching on, presents a huge market for these apps and devices, and several entrepreneurs have taken the leap into creating startups that provide technology-based fitness solutions.

“Yes, I’d say India is on the brink of a fitness revolution. The kind of energy and enthusiasm I can see on our platform shows that Indians are getting serious about fitness. It’s not just about morning walks around the park anymore,“ says Roshini Gilbert, director of services and training at HealthifyMe, a Bangalore-based startup that provides fitness solutions through a free app that monitors calories and activity, and a pro version that connects users to fitness trainers and nutrition experts.

HealthifyMe was started by Sachin Shenoy and Tushar Vashisht, a former investment banker who quit his job in the US to join the Unique ID project with the GoI. During the project, Vashisht gained around 18 kg. While trying to reverse his lifestyle, he started tracking his diet which ultimately led to the birth of HealthifyMe. Shenoy and Vashisht realised that for Indians, it is virtually impossible to track calories on Western apps because home made Indian food is not calorie-defined, and feeding the number of calories into trackers becomes a matter of guesswork.

The next step was to connect users to experts, such as Gilbert and her team, who engage with users on a daily basis and provide training and diet advice keeping in mind the user’s routines, habits, likes and dislikes, and are available via in-app messaging, audio-video chats, and text WhatsApp communication. “For Indians, personal interaction is of paramount importance. We, as Indians, like assisted models, not self-service models,“ says Vashisht.

“Unlike in the West, where fitness enthusiasts are largely self-motivated, Indians like group activities, or want to be told what to do. The personal touch is important to them,“ says Gilbert, which is where the Indian-developed apps may have an advantage over early entrants like global brands FitBit, Jawbone, Garmin and Misfit. At this point, the market is also being flooded by inexpensive fitness trackers from Chinese brands such as Xiaomi. How can Indian brands distinguish themselves?

Innovation and personalization are key, says Gondal. For instance, not only does GoQii connect users with experts, but it also offers a Karma points system. “The activity monitored by your Goqii band converts into Karma points, which are converted into cash that is donated to a charity partner. The more you exercise, the more money you can give to the needy,“ explains Gondal.

Another Bangalore-based fitness-tech company, 2mpower Health Management Services, also offers a points-based rewards system for working out to clients who sign up with its GetActive platform and use its device. Users get something called `GetActive currency’ which is added to their accounts, so that the more they exercise, the more points or currency they have to redeem against purchases at designated stores.

The GetActive fitness and sleep tracker band, which is customized for each user depending on his or her BMI, was developed by the company in 2011 and has the largest presence among corporates in cities such as Bengaluru, Hyderabad, Chennai, and the NCR region. The company, which has seen 50,000 sign-ups, of which almost 40,000 are active users, has tied up with more than 35 corporates clients including Intel, Wipro, GE, Cisco, KPMG, E&Y, SAP, and IBM, to provide employees of these companies with GetActive bands. “The bands benefit not only employees, who are motivated to remain active, but also the employers as they want their employees to be healthy and seek more efficiency in the workforce. Also, if you have a large number of users in one company, it helps individuals to reach fitness goals faster,“ says M Hussain Naseem, co-founder and CEO of GetActive. Indian devices have a distinct edge over foreign-made ones, says Naseem. “For example, if you wear a foreign device and travel by car on an Indian road, it adds a certain number of steps that you have not covered because of the condition of Indian roads. Those products are simply not suited to the Indian environment.“

At the end of the day, however, technology can only do so much for you. Companies can create the most sophisticated fitness devices -but you still have to wear them and run. “Wearables are fun to have but I am yet to see a device that has actively helped anyone stick to their goals over a sustained period of time,“ says lawyer Rahul Matthan, a self-confessed gadget freak. “I have pre-ordered the Apple Watch, primarily for the fitness features, but I doubt the watch will create a significant improvement in my fitness-related activities. All the devices that I have tried offer little more than an incentive to keep fit -but none of them has lifted to the level where they offer true and effective motivation to stick to your fitness goals,“ says Matthan.

After all, you can’t get religion if you don’t go to church. -Inputs by Saniya Raza

HOW DO WEARABLE FITNESS TRACKERS WORK?

Almost all of today’s fitness bracelets are based on a three-component accelerometer that enables measuring acceleration against the three axes, i.e. start and end of the motion, and its intensity. A regular accelerometer used in Jawbone UP! Consists of two electrically charged plates and a small counterbalance are in-between. When the sensor is still, the counterbalance is located right in the middle. However, once you start moving, the counterbalance moves from one plate to another, and the sensor registers the motion. Gathering data about the motion is only one task. The device should process this data so that users can view it on the screen. To ensure accuracy, makers such as Fitbit test the data against that received by other devices. The ways wearables are synced with a smartphone are different, too. For instance, Shine and Fitbit sync via BlueTooth -the most popular method. To save battery life, Jawbone UP! Syncs with an iPhone via an embedded mini-jack and earphones slot.

A one-year-old Bangalore-based tech startup, Oxstren, is developing a product that it claims will put India on the wearable tech map. The team at Oxstren is developing a `smart gym glove’, which identifies exercises, evaluates exercise forms, measures force, analyzes grip and seamlessly tracks all fitness activities, while providing useful biometrics such as Real-Time Heart Rate, Respiration Rate, Hydration Levels, along with an inbuilt Diet Tracking app. “These gloves analyze the grips in different exercise forms and calculate the forces exerted and resisted, and identify the exercises done by the user, be it a bicep curl or a bench press. This not only converts into the most extensive fitness tracking but also aids the user during a workout to analyse and evaluate exercise forms via our algorithms,“ says founder and CEO of Oxstren, Pratik Saraogi

We have seen wearable fitness devices consistently rising in popularity since we launched the category on amazon.in last year. In the recently concluded Amazon India Great Summer Sale, we had participation from various brands (Garmin, GOQii, Mymo) for a wearable tech store-specific promotion and it performed extremely well. We saw the first boom around Diwali last year when we launched GOQii. This was followed by the Polar Loop, which became the most popular item on the sports page in January. Brands like GOQii and Polar consistently figure amongst top brands in sports. With recent launches from Garmin, ERI, Mymo and a few other products in the near future, this is a category bound to grow at a fast pace PANKAJ JATHAR | CATEGORY LEADER, SPORTS, AMAZON INDIA