Home » Trending » 25% of Indians may die of lifestyle diseases before they are 70: Study 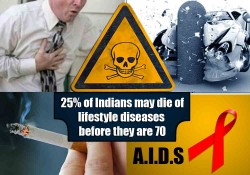 25% of Indians may die of lifestyle diseases before they are 70: Study

NEW DELHI: With increasing prevalence of lifestyle diseases in India, one out of four Indians is at risk of dying from non-communicable diseases like diabetes, cardiovascular ailments or cancer before the age of 70, according to estimates of various global and domestic organisations.

The findings are part of a white paper released by the Confederation of Indian Industry and academia on Wednesday.

“Every year, roughly 5.8 million Indians die from heart and lung diseases, stroke, cancer and diabetes. In other words, 1 in 4 Indians risks dying from an NCD before they reach the age of 70,” the white paper said.

Experts say the government needs to urgently build awareness programmes for NCDs in line with that for HIV and tuberculosis.

“Prevalence of NCDs is a result of lifestyle patterns which have changed significantly over the last decade. The government’s programmes so far have been focused on HIV and tropical diseases. But with the increasing NCD burden, awareness needs to be created and ramped up from community level to across the country,” said Kevin L. Walker, Executive Director, Partnership to Fight Chronic Disease, a global organisation working towards raising awareness about how to counter diseases like diabetes and cardiovascular disabilities.

Turn Towards Optimism with a Commendable Lifestyle

Many other global organisations including World Health Organisation and other agencies of the United Nations have now carved out specific strategies to tackle the rising disease burden due to changing lifestyle and eating habits.

The government said it is set to roll out a preventive and promotive programme in six districts to spread awareness about the disease.”We have chosen six districts. Around 200 doctors will be posted in each district. They are currently undergoing training, and the programme is expected to be launched by the end of this month,” Dr Jagdish Prasad, director general of health services, said at the National NCD summit organised by CII

According to the NCD country profiles of 2014 released by WHO, diseases like cancer, chronic respiratory problems and cardiovascular diseases are the biggest global killers accounting for 38 million deaths every year with a whopping 28 million in low and middle – income countries, including India. As per WHO estimates, NCDs account for almost 60% of the total mortality reported annually in India.

Heart and vascular diseases, common cancers, chronic lung disease, diabetes and mental illness are the major NCDs prevalent in India. Apart from unhealthy diet and physical inactivity, use of tobacco and alcohol, as well as psycho-social stress are considered key reasons for the increasing disease burden.