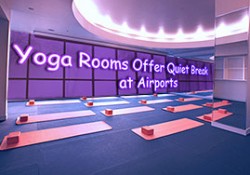 Sallie Jo Cunningham was not expecting good night’s sleep. Waiting for her 12:30 am flight out of San Francisco International Airport to depart, Cunningham, a business development professional, had resigned herself to a groggy trip back home.

Then she visited the airport’s yoga room, a dimly lit, hard-wood-floored oasis of calm. “I thought it would be a good idea to stop in the yoga room and see what they offered,” she said. The mats, blocks and bolsters were useful, but not so much as just having a quiet place to stretch, practice her flow and unwind.

“I can tell you that I did feel quite a bit more relaxed for that flight,” Cunningham Said. San Francisco is one of a growing number of airports that are creating rooms for yoga and meditation. Airports including O’Hare in Chicago, Dallas-Fort Worth and Burlington in Vermont all have set aside space for yoga. A temporary yoga room at Health-row in London proved so popular last year that it was made permanent, and its operator is looking to open one in Hong Kong. Travel industry analysts say that the rooms are a reflection of the increasingly tense environment at airports. “This is a tacit recognition by airports that travel can be stressful, and they want to do what they can to help travellers reduce that stress,” said Henry Harteveldt, a travel industry analyst. “Yoga’s probably a lot healthier than trying to quell stress at an airport bar.” Source-Times of India Dated May 6th,2015