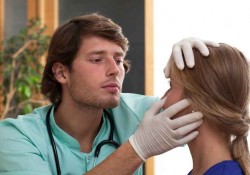 You are at increased risk if a close relative has a thyroid problem. “Heredity plays a role in both underactive and overactive thyroid. There are thyroid antibodies that can be checked, although not everyone with a positive antibody necessarily develops abnormal hormone levels. The antibodies may play a role at the time of pregnancy, so it is best for this to be evaluated before planning a pregnancy if there is a family history of thyroid disease,” says Dr Sanghani. Another important point is that the thyroid problem may skip generations; someone with an underactive thyroid may have healthy parents, but his/her grandparents might have had thyroid troubles.

Hormones:“Abnormally early or late onset of puberty and menstruation, and irregular, very light or very heavy, menstrual periods, or absent menstrual periods could be signalling an undetected thyroid problem,” says Sheetal Agarwal, senior obstetrician and gynaecologist, Apollo Spectra Hospitals, New Delhi. “Hypothyroidism’s symptoms often mimic those of PMS (premenstrual syndrome), including bloating, weight gain, mood changes, changes in libido, sleep disorders, fatigue and constipation,” she adds.
A review published earlier this year in The Obstetrician And Gynaecologist journal reported that the thyroid problem could have significant effects on a woman’s reproductive health and suggested thyroid screening for women with fertility problems. “Thyroid disorder could also be the cause of fertility problem, as an overactive or underactive thyroid may affect ovulation,” says Dr Agarwal. She says that women who suffer from PMS or are having trouble conceiving should consult a doctor so that their thyroid function can be evaluated.

Too tired or stressed: Usually the symptoms of mild hypothyroidism are non-specific, change gradually, and are often written off as stress or overwork. “Most women suffering from hypothyroidism go to the doctor because they are fatigued. If you sleep all night and still need an afternoon nap, get your thyroid checked and if that is normal, then get tested for sleep apnoea,” says Dr Sanghani.

Abnormal weight changes: In hyperthyroidism, a person loses weight for no apparent reason, and in hypothyroidism, weight gain is a perpetual problem, leading to a battle of the bulge that does not respond to even the most rigorous weight-loss effort. But once a person is put on the right medication, the weight gradually gets back to normal. “Often a patient gets the false notion that their thyroid is the culprit for weight gain when it isn’t. If someone is taking thyroid medication and their TSH is normal, then their inability to lose weight cannot be ascribed to thyroid. If their TSH is raised but in the sub-clinical range, even then the weight gain is not from hypothyroidism. There is a lot of misunderstanding in society about how often thyroid issues cause weight gain,” says Dr Sanghani.

Depression and anxiety: Research has found links between an increased risk of depression and both over- and underactive thyroid glands.
“Both hyperthyroidism and hypothyroidism have been linked to mood disorders and decreased sexual desire (libido). Mood swings may be the first sign of an overactive or underactive thyroid. The nervousness, anxiety and hyperactivity of hyperthyroidism often interfere with a person’s ability to function in normal daily activities,” says Dr Surana.
“A lot of women come to me with symptoms like proneness to excessive crying, withdrawal from people, feeling lousy all the time, not wanting to get up in the morning—all classic symptoms of depression. But antidepressants don’t work on them at all. In most of the cases, a thyroid test reveals hypothyroidism, and the patients respond well to thyroxine and get off antidepressants,” he adds.