Home » Trending » Restaurants May Be Key Component to COVID-19 Spread 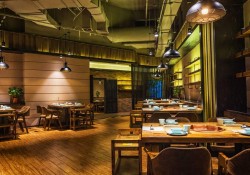 Restaurants May Be Key Component to COVID-19 Spread

Restaurants appear to play a key role in the spread of COVID-19, researchers at the Centers for Disease Control and Prevention (CDC) say.

“Masks cannot be effectively worn while eating and drinking, whereas shopping and numerous other indoor activities do not preclude mask use,” write Kiva A. Fisher, PhD, from the CDC, and colleagues.

Although public health authorities have recommended social distancing and mask-wearing for months, knowing exactly where people contracted the virus could help hone those recommendations, the researchers say. Their findings were published in Morbidity and Mortality Weekly Report on September 11.

Most research into the ways people have contracted COVID-19 has not included control groups, the researchers found.

To address that gap, they compared 154 adults who had symptoms of COVID-19 and had tested positive for the disease with 160 adults who had similar symptoms and who tested negative. The two groups were matched by age, sex, and study location.

The researchers asked the participants about wearing a mask and possible community exposure activities, such as attending gatherings with fewer than or more than 10 people in a home; shopping; dining at a restaurant; going to an office, salon, gym, bar/coffee shop, or church/religious gathering; or using public transportation. The participants indicated their responses using a five-point scale; responses ranged from “never” to “always.”

The two groups reported similar exposures to COVID-19, although there were a few key differences. Of those who tested positive, 42% reported having close contact with someone who had COVID-19; by contrast, only 14% of those who tested negative indicated such contacts. Of those close contacts who had the disease, 51% were family members.
Those who tested positive were 2.4 times more likely to have dined at a restaurant in the 2 weeks prior to falling ill (adjusted odds ratio [aOR] 2.4; 95% CI, 1.5 – 3.8). In the study, restaurant dining included being seated at a patio, being seated outdoors, or being seated indoors.

Among the 107 participants who reported dining at a restaurant and the 21 who reported going to a bar or coffee shop, those who tested positive for COVID-19 were less likely to report seeing most of the other patrons adhering to recommendations such as wearing a mask or maintaining distance from each other.

In addition to the difficulty of wearing a mask while dining, some reports have implicated the ventilation systems of restaurants, the researchers note.

The researchers conclude that “implementing safe practices to reduce exposures to SARS-CoV-2 during on-site eating and drinking should be considered to protect customers, employees, and communities and slow the spread of COVID-19.”