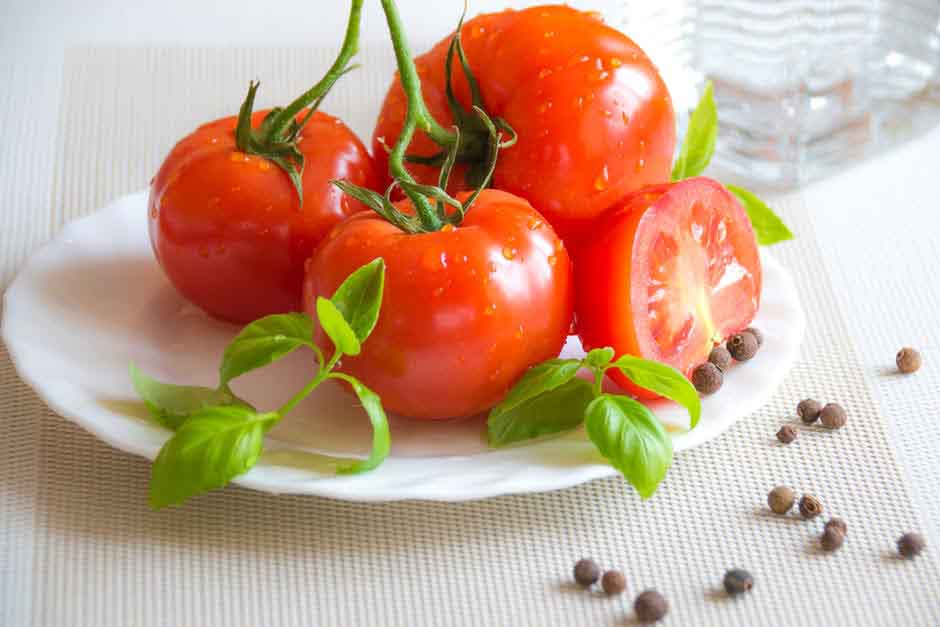 Tomato is referred as the functional food, which means it does way beyond than just providing basic nutrition. These are loaded with powerful nutrients and antioxidants that help to combat various diseases and also assist you in to keeping in good shape. Read on to find out the Benefits of Tomatoes on your health.

Tomatoes, called as Solanum Lycopersicum, originated in the Central and South America. There are a lot of varieties such as cherry tomatoes, plum tomatoes, grape tomatoes, beefsteak tomatoes, tomberies, black krim, tigerella, etc. that are grown in temperate climates all over the world. It is beneficial for your skin, hair and health. What makes it a healthy fruit? (Yes, it’s a fruit). Well, this magical carotenoid which gives tomatoes its super powers is Lycopene.
Lycopene is the most important antioxidant present in tomatoes. It protects us against a lot of deadly diseases such as cancer, diabetes, and a few heart diseases. This antioxidant is widely believed to be responsible for all the beautiful work tomatoes do. Let’s have a look at the numerous Benefits of Tomatoes on our health.

Tomato is a super fruit known for the presence of large amounts of lycopene. This antioxidant is responsible for the anti-cancer properties of this fruit. It helps in lowering the risk of cancer of stomach, lungs and prostate glands. Because of their high antioxidant levels, tomatoes make the right choice for combating breast cancer as well.
One can increase the fighting potential of tomatoes by consuming it in processed forms such as sauce, juice, paste, etc. These have a higher concentration of lycopene. This is also used as the absorption of nutrients of tomatoes while it is in its processed forms becomes easy. Cooked forms are equally healthy. Consuming a variety of foods with tomatoes is, however, necessary as they alone can’t help combat cancer.
What does Lycopene do? Cancer or tumour cells remain dormant inside the body for years until a chemical reaction triggers them. They attach to the blood supply in the body. Lycopene acts as an inhibitor in this linking process and prevents the further growth of cancer cells. Adiponectin, a potent chemical compound, present in tomatoes helps fight cancer.

Well its Lycopene, again. Consuming tomatoes on a day to day basis for a few weeks can cut down the bad cholesterol or LDL cholesterol levels by 10%. As per studies people who consume fresh tomatoes can lower their bad cholesterol levels and increase the good cholesterol.
Tomatoes are not only a great source of lycopene, but they are also an excellent source of beta-carotene, flavonoids and folate. All of these are beneficial for the cardiovascular health. The nutrients present in tomatoes are helpful in reducing homocysteine and platelet aggregation which can have a bad effect on the heart’s health.

3.Tomatoes are good for Digestion

Digestive juices consist of chloride which is an essential component required in the process of digestion. Lycopene is believed to prevent gastrointestinal cancer as well.
Eating tomatoes can help you deal with gastritis, constipation, diarrhoea, etc. This also helps in removing harmful toxins from the body.

According to the University of Maryland, consuming antioxidant rich foods like tomatoes can contribute in avoiding urinary tract infections. Tomatoes also consist of Vitamin C which makes them ideal for treating the infections of urinary tract. Vitamin C prevents the growth of E.coli bacteria and thereby making the urine less acidic.

The magical antioxidants present in tomatoes make them helpful in reducing the risk of gallstones as well as kidney stones. You can prevent them by consuming tomatoes in the form of soups and adding them to salads, meats and eggs.

“According to the University of Canada, two glasses of tomato juice daily strengthens bones and can ward off the risk of osteoporosis. Lycopene slows down the rate of breakdown of bone cells, preventing osteoporosis. Tomatoes are rich in beta- carotene. This nutrient, when taken through the diet changes to Vitamin A. This vitamin, is necessary for bone growth and maintenance.
Another vitamin such as Vitamin C present in tomatoes is essential for the formation of bones and connective tissue. Vitamin K and Vitamin D together are essential for bone metabolism. They increase bone mineral density and reduce chances of fractures. Deficiency of these vitamins especially C can lead to underdeveloped bones.

Lycopene is a wonder antioxidant found in tomatoes which help in boosting the male fertility by 70%. It is also known to reduce the risk of prostate cancer in men by 35% and advanced cases by 50%. Consumption of tomato juice was also believed to have similar beneficial effects.
According to a study, men who had meals with the highest lycopene concentrations were found to be 59% safer from ischemic stroke.

Tomatoes supply three major antioxidant vitamins like beta-carotene, Vitamin C and Vitamin E. Tomato rich diets improve the functioning of white blood cells. These cells are known for fighting infections. Antioxidants protect these cells against damage. They suffer from 38% less damage from free radicals after the consumption of tomatoes on a regular basis.

One of the many Benefits of Tomatoes is that they rich in antioxidants which are helpful in combating the harmful effects of free radicals which can cause damage to the brain. When taken with olive oil, it shows better effects.
Lycopene helps in preventing diseases like Alzheimer’s and Dementia. Tomatoes also assist in improving cognitive function and concentration.

Tomatoes are wonderful fruits because of the antioxidants that it consists of. These antioxidants help in fighting inflammation and other diseases like arthritis. The best ways to consume tomatoes is to eat them raw and sometimes cooked. We shouldn’t stick to one form in particular.

How to Consume Tomatoes?

There are some wonderful Health Benefits of Tomatoes which probably we are not aware of. Just fit them into your diet the way you like, and you’re ready to go. Stay Healthy, Stay Happy.