Home » Trending » How genes determine what you can eat 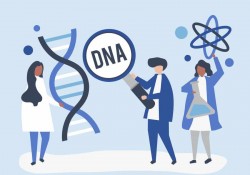 How genes determine what you can eat

You are what you eat in far more ways than you realise. This week, US researchers announced the discovery of ‘vegetarian gene’ in populations that have subsisted on vegetarian food for several generations.
An analysis of data from the 1000 Genomes Project showed 70% South Asians, 53% of Africans and 29% of East Asians had the vegetarian genetic variation –called an allele –compared to just 17% of Europeans, reports a study in the journal Molecular Biology and Evolution. The allele helps vegetarians better process omega-3 and omega-6 fatty acids, which are scarce in vegetarian food sources but are essential for brain development and fighting infection.

Omega-3 is found in fish, whole grains, flaxseed oil, fruits and vegetables, and helps regulate metabolism and bring down inflammation, which fights infection but in excessive amounts raises the risk for several diseases, including heart disease, stroke, cancers and Alzheimer’s. Omega-6, found in beef, pork, eggs, nuts, whole grains, and vegetable oils such safflower, sunflower, soybean and corn, adds to inflammation while promoting healthy skin, bones, hair and reproductive health. The challenge, then, is to consume omega-3 and omega-6 in the healthy ratio of 1:1, but this ratio is often a warped 1:15 in modern diets low in fish and nuts and high on fried foods.
An opposite adaptation of the “vegetarian” allele is found in the Inuit in Greenland, who mainly eat seafood packed with omega-3 fatty acids, and therefore need to absorb them in lower amounts.

Populations where dairy has been an integral part of their traditional diets over several thousands centuries have genetically adapted to digest lactose, the main sugar in milk, unlike populations that don’t have much milk or dairy — such as south East Asia and certain parts of southern Africa, reported a study in Nature.
Until the last Ice Age, milk was a toxin to adults because, unlike children, adults could not produce the lactase enzyme needed to break down lactose for absorption. But as farming replaced hunting and gathering 11,000 years ago and people started keeping cattle, herders learned how to reduce lactose in dairy products by fermenting milk to make yoghurt and cheese, which is easier to digest.
Over the next several thousand years, populations — in South Asia, Europe and the Middle East– that continued having milk in more digestible forms developed a genetic mutation that gave them the ability to produce lactase and drink milk throughout their lives. This gene adaptation gave them a rich new source of nutrition when food was scarce and harvests failed.
Even now, young children almost universally produce lactase to digest their mother’s milk, but most switch off the lactase gene as their food sources diversify and their ability to break milk goes down. Only one in three of the world’s adults can digest lactose beyond the age of about seven or eight, with drinking more than two glasses milk causing indigestion, explosive diarrhoea or dysentery in varying degrees in all others.
Thrifty gene
Ever wondered why Indians are more prone to diabetes, abdominal obesity and heart disease than people in other parts of the world? In 1962, geneticist James Neel proposed the “thrifty gene” hypothesis to explain why some races have more diabetes than others. He proposed that populations traditionally dependent on agricultural for several generations developed a ‘thrifty gene’” to conserve energy and store it as fat to help them tide over periods of food shortages because of famines and other disasters. This, said the study in the American Journal of Human Genetics, made raised the risk of diabetes in populations such as South Asians when they had an abundance of food.
In 1998, Neel modified and widened his hypothesis to link it to the metabolic syndrome-related metabolic diseases such as insulin resistance (diabetes), abdominal obesity, abnormal blood fats, and hypertension – to the physiological stress of being forced to adapt to changes in food, environment and less-active lifestyle over a short period of time.

What’s more widely accepted is Dr David Barker’s hypothesis (also called the “thrifty phenotype hypothesis”), which proposed that inadequate nutrition in the womb impaired the development of the pancreas to prepare the unborn baby for a life of starvation, which made their pancreas falter and pack up when they were exposed to unlimited food as adults, raising diabetes, abdominal obesity and heart disease risk.
Overwhelming though, these studies seem about the limited food options encoded in our genes, it’s easy to adapt by moving away from McDonaldisation of diet and dipping into wider food sources to make the most of our genetic legacy.