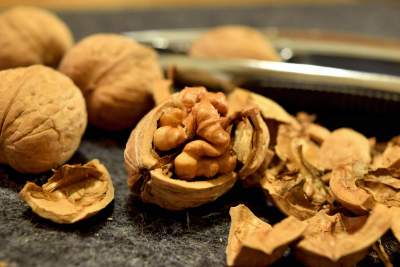 Unleash the Benefits of Walnuts

There are many foods that we take without knowing their benefits and usefulness. Walnut is a very common and popular dry fruit and is used as an ingredient in many dishes. We even feed on handfuls of raw walnut sometimes. Even though walnut is so commonly eaten and used, people are still unaware of the multifarious Benefits of Walnuts apart from keeping the skin moist and young.

As per the new studies, consumption of walnut on a regular basis can reduce the chances of cancer in your bowels. Nowadays, cancer has become very common but the treatments are still very expensive, and it is always better to prevent cancer than cure it. Bowel cancer is one of the common types of cancer and it can be prevented by having a handful of walnut every day.

It has been found in studies that the greater the amount of omega-3 in the body, the lesser are the chances of growth of cancer. The walnuts you take change the expressions of miRNAs and the other micro nucleic acid. They obstruct the growth of tumour in the body. Besides walnuts, if you eat other foods rich in omega-3, it will also help. The more the amount of omega-3 in your diet, lesser are the chances of tumour growth in the body. So, walnuts can be taken quite frequently, rather regularly

Scientifically experimented on the mice

The study was conducted to examine the effects of walnuts on miRNAs by Dr Christos Mantzoros from the Harvard Medical School. miRNAs control the adaptability of the genes to the environment and its changes. Dr Mantzoros said that the walnut diet brings a significant change in the expression profiles of the miRNAs of a cancerous colorectal tissue in the bowel. Bowel cancer is also called colorectal cancer. In the research, the mice were fed a walnut diet and another control diet. After twenty-five days, the mice which were fed walnut diet were found to obstruct the proliferation and blood supply to the cancerous cells. They were said to have been positively engaged.

Bowel cancer is one of the common forms of cancer followed by lung cancer. This is all because of the changing lifestyles and harmful habits of men and women and lack of proper diet. So the least we can do is to incorporate good eating habits and find out the things which can help us eat healthily and the very many Benefits of Walnuts gives us ample reasons to include this food in our day to day diet.