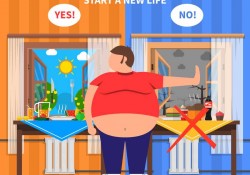 India among top 5 in obesity

While India and China continue to have the largest number of underweight people in the world, both the countries have also broken into the top five regarding obesity, a new study published in The Lancet journal has found.
With 102 million men and 101 million women underweight, India leads the world in being home to over 40% of the global underweight population. China is a distant second with about 8% of underweight men and over 12% of underweight women.

“If these trends continue, by 2025, global obesity prevalence will reach 18% in men and surpass 21% in women; severe obesity will surpass 6% in men and 9% of women,” the study, led by Majid Ezzati, professor at the School of Public Health, Imperial College London said.
“Nonetheless, underweight remains prevalent in the world’s poorest regions, especially in South Asia,” it added.
The study used data from national and smaller studies representing 19.2 million adults from 186 countries to arrive at its conclusions. It used the standard definitions of underweight (Body Mass Index less than 18.5 kg per sqm) and obesity (BMI greater than 30 kg per sqm). BMI is a ratio of weight and height, standardised to various age groups.
Both underweight and obesity are well-known causes for several fatal conditions like heart diseases, diabetes and others.

Credit: India among top 5 in obesity